The very blustery conditions have had a deadening effect on bird activity, with the few visible birds acting like coastal migrants and flitting low and surreptitiously between cover. Only the corvids are revelling in this weather, suddenly bursting into the air and tumbling and swooping en masse in the air currents. I don’t think it’s anthropomorphic to imagine these birds doing this out of sheer enjoyment .
Nothing particularly special about although I added Reed Bunting, 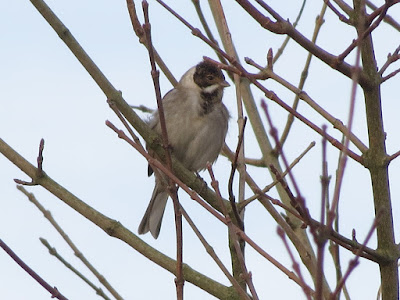 a pair of Treecreepers and a Buzzard (over the garden) to my year list.

The resurgent floods have brought in good numbers of gulls, mainly Black-headed but with a few dozen Herrings, a handful of Lesser Black-backeds and a few Common Gulls. Despite their name the latter aren’t! (Except for mid-March when birds pass through this area en route to northern breeding sites). There was also a single Great Black-backed Gull, much the scarcest of the regular species in the village.

Today also saw the first good count of Redwings for a while with around 200 birds seen. This was in sharp contrast to Fieldfares which barely tallied a dozen. I assume this reflects the onset of colder weather to the north.

The first flowers are out with Aconites… 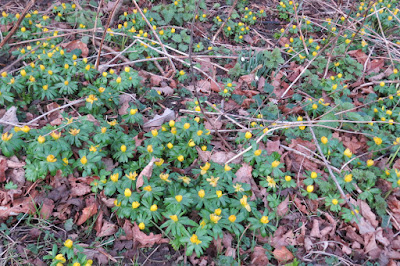 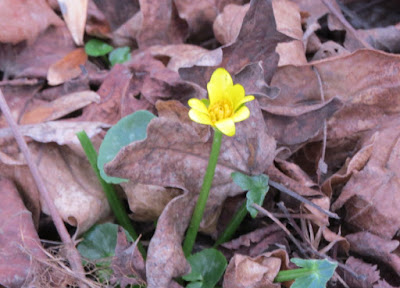 and what I assume are the emergent leaves of Lords & Ladies (Cuckoo Pint) joining the Snowdrops. 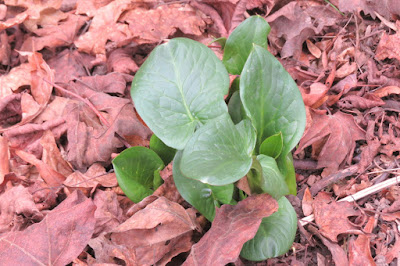 With these plants, Song Thrushes singing and woodpeckers drumming vigorously there is already a hint of the season to come…

I’ve been suffering from this widespread lurgy so a bit of an effort even to drag myself out today and it was very quiet apart from my first Sparrowhawk of the year, a cracking little male, and a flock of around 35 Lesser Redpoll in the field by the school.
In the Magic Garden a small group of Mallard got up off the Lake but out of the corner of my eye I saw a different duck spring out of the reeds but lost it almost immediately. I accidentally flushed the same bird from the bog area later. It was a female Shoveler, a nice sighting given the first parish record was only in December. 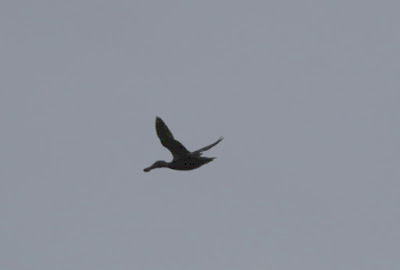 A little bit of serendipity here as well – I have a Kingfisher call as one of the ringtones on my phone. A friend texted me, the call went off and almost immediately a calling Kingfisher flew in and perched within a few feet of me on the little jetty. I was so surprised I didn’t even lift my camera and soon, realising its mistake, it shot back off across the water
I also have Quail as one of my tones, I’m looking forward to the same happening this summer!

On the final patchwork challenge results for 2015 I just managed to scrape in to win the Inland North mini-league, a hair’s breadth ahead of Steve Ward from Wensleydale.

There’s a bit more local rivalry this year as well with Chris Knight in Thrintoft also joining the fray…
Posted by Nick at 10:46 3 comments:

A walk along the river today. A Barn Owl was sitting out in broad daylight in its favoured field just north of Morton bridge. 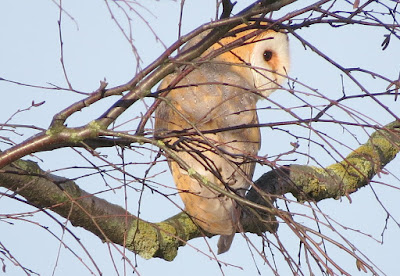 I hoped that the freezing conditions would have brought wildfowl on to the river but in fact it was very quiet on the water with only a dozen Mallard and a single Goosander. I did see 22 Cormorants, including one group of 17 birds, the largest single flock I have seen in the parish. 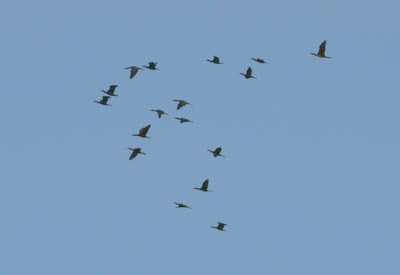 Two Little Egrets continued the winter records of this species and along Potter Lane... 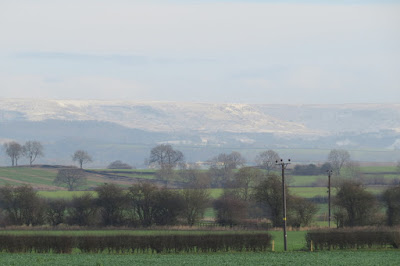 ...there were 22 Meadow Pipits and a distant Fox in a beet field here. 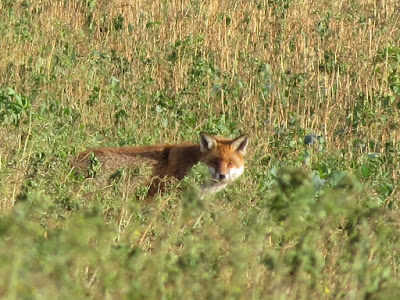 Finally, a Grey Wagtail was again at Morton sewage works. 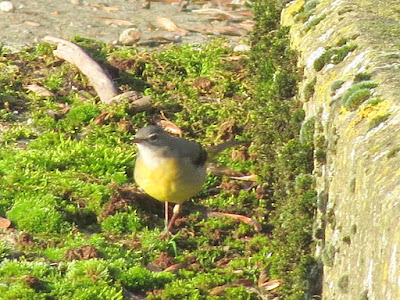 Definitely more wintery now, with a dusting of snow on the Hambletons lit by the late afternoon light... 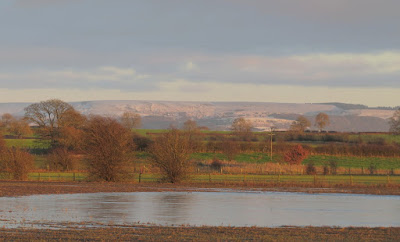 As was this Fieldfare… 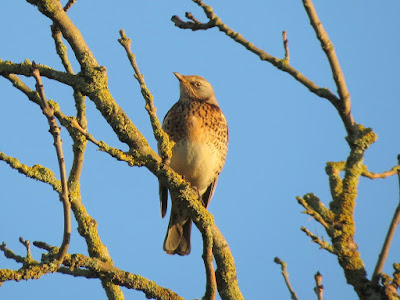 Most of the floods have now receded and the remnant areas were largely frozen... 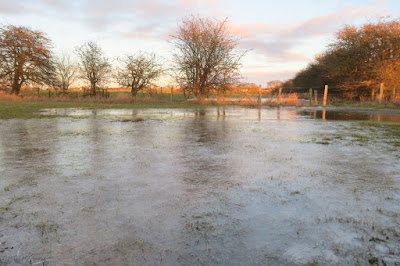 ...but on the small un-iced area in the bottom fields there were still 40 Teal, a dozen Mallard, 200 Black-headed Gulls and a family of Mute Swans. 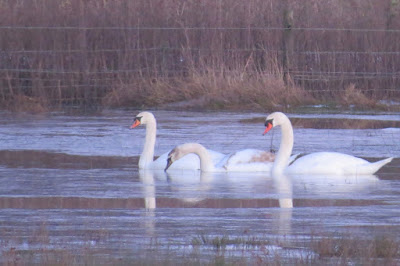 On Langlands there was just a single Lapwing. I assume it was injured as it's rare not to be in a flock at this time of year. Quite a difference from last week when there was a group of at least 700 birds on here. 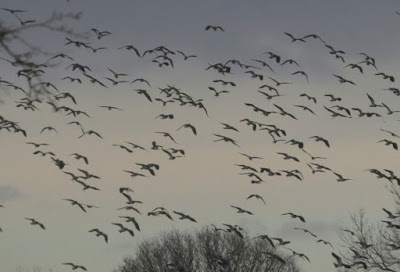 Incidentally John, the farmer here, still uses the old Yorkshire name of Tearfit for the Lapwing. Even more impressive was a superb flock of more than 1000 Golden Plover which roosted on the floods last weekend.


A couple of villagers reported a Peregrine near the school last week. There was one seen in Scruton the week before so possibly a bird hanging around. This might also explain a couple of ‘dreads’ I saw where all the birds on the floods suddenly exploded into the air for no apparent reason.
Posted by Nick at 09:10 No comments:

First chance today to have a proper walk out. The floods continue to turn up the goods. 300 Greylags, 50+ Teal, at least fourteen Wigeon, two Gadwall, Little Grebe, 300 Lapwing, 20 Golden Plover, 45 Curlew and a Dunlin spotted in flight and then located amongst a distant Lapwing flock. 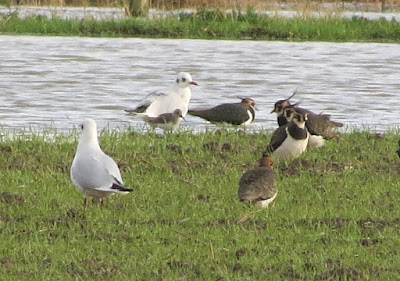 This is one of only a handful of parish sightings and a bird I didn’t pick up in 2015.
Good numbers of winter thrushes around today with the largest flocks of Redwing since the first autumn arrivals, many of them feeding on the ‘tide line’ of the floods. Other birds totting up the 2016 year list included Little Egret, Kingfisher, Redpoll and a winter Chiffchaff. 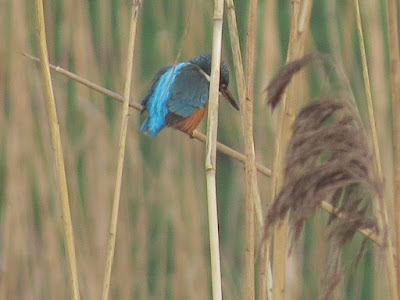 This Kestrel was again ‘hunting’ worms. 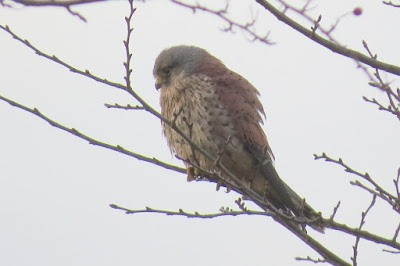 As I watched a second bird flew in with what I at first thought were falconer’s jesses, in fact it was a huge earthworm dangling from its feet.  The other bird chased after it and attempted to grab the worm but justice prevailed and it was unsuccessful


Nice also to see four Roe Deer on Langlands today, the first I’ve seen since last summer.
Posted by Nick at 15:23 No comments:

That Was The Year That Was continued....

It was a mixed breeding season with some summer migrants like Blackcap and Chiffchaff appearing to be commoner than usual. In fact mist netting showed the Chiffchaff to be the most numerous bird trapped in the Magic Garden. 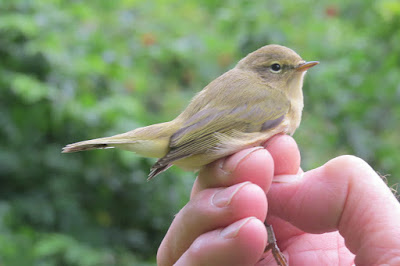 I also saw more Spotted Flycatchers than usual although this was from a very low base. 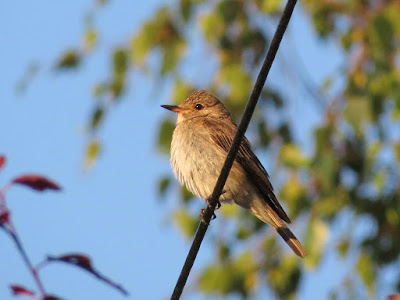 Other migrants were much scarcer with both Whitethroat and Willow Warbler in particular being exceptionally scarce. But for all species the cold, wet conditions meant productivity was very low and there were depressingly few young birds seen.

Scarcer summer birds included an adult Yellow-legged Gull, found amongst hundreds of large gulls loafing by the Swale, and a surprise find, three Mandarin on the river, the first parish record. 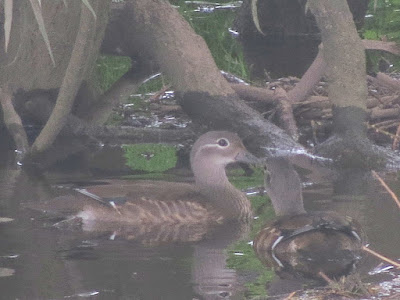 A day of torrential rain in late August dropped my first and second record respectively of Tree Pipit and Stonechat into the same field. 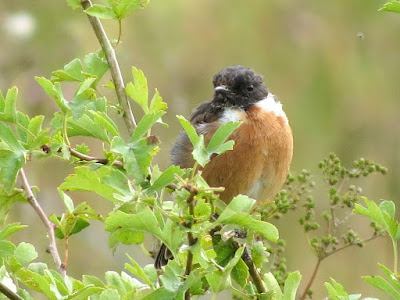 Later autumn birds of note included a 100 Pinkfooted Geese over Morton, a Peregrine in Ainderby, Osprey on a number of dates on the river, record numbers of Hobbies and a Reed Warbler trapped in the magic garden. 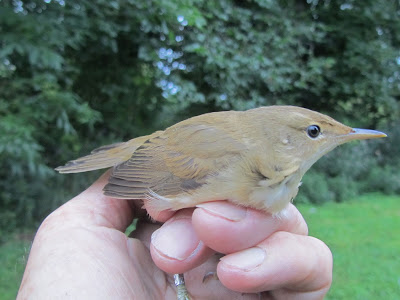 The second winter period was dominated by the floods and amongst the pick of the sightings was the first parish record of Shoveler, the second sighting of Gadwall, a winter Greenshank and a record count of Teal.

That Was The Year That Was...

The final year list for the parish was 113 species, the best annual total yet recorded.
Taking a quick look back at the year. The early months’ highlight was the first record of Water Rail (in the boggy area of the Magic Garden). Birds were seen in both January and February here. 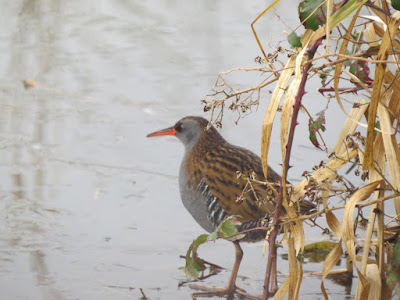 The first winter record of Little Egret was also noteworthy as was the second sighting of Goldeneye for the parish. A superb wintering flock of buntings near Langlands included more than 200 Yellowhammers. Barn Owls have recovered well locally and I caught up with my first ever village bird in February, one of a good series of sightings this year. 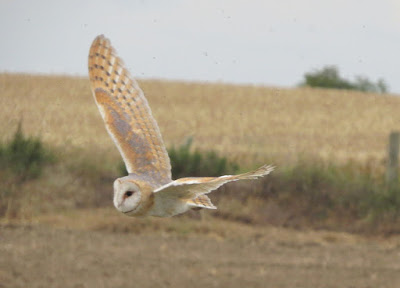 March is the peak time for Whooper Swan migration as they move up the Vale of York and onwards to their breeding areas. Seeing them is very much a case of being in the right place at the right time and I was fortunate to spot a group of nine flying over the river at Morton.
March also saw the first summer migrant with a Chiffchaff singing in Ainderby on 20th March and a Wheatear in Morton-on-Swale on 26th but generally birds were late in arriving with Sand Martins in particular not appearing in any numbers until late April.
Scarcer spring birds included a pair of Little Ringed Plover, Green Sandpiper, Red Kite, Hobby, Whinchat and my first village Grasshopper Warbler (this is the best picture I managed!).... 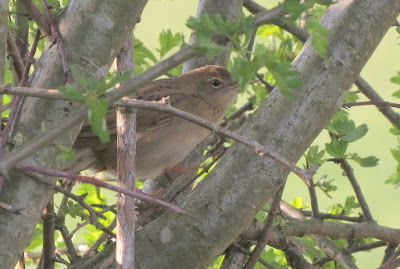 I was also particularly pleased to hear Cuckoo, my first parish record for almost a decade.