I neglected my birding duties on Easter Monday and went to see Bristol Rovers play instead. In hindsight this was a bad move, not only did we lose but I seem to have missed a good day of local movement.
Chris Knight found a Firecrest near Little Langton, an Osprey was photographed drifting along the Swale and Chris also flushed a possible Jack Snipe from near the famous muck heaps. This latter bird would be a first for my patch (and the parish) so I was keen to see if I could re-find it.
I tried when I got back from the match yesterday but it was almost dark and apart from hearing a handful of Snipe ‘squelch’ away (plus Little Owl and Grey Partridge) it was a fairly pointless exercise. So back early this morning. This time only three (Common) Snipe went up. Around the heaps themselves there were the usual mix of birds with Skylark, Pied Wagtail, Reed Buntings and around a dozen Meadow Pipits. 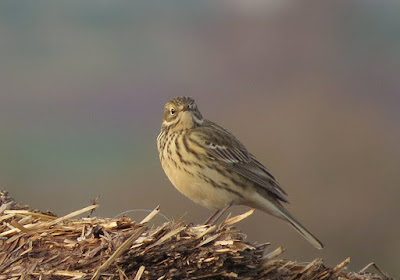 One of these birds was singing although not doing the usual ‘parachute’ display. 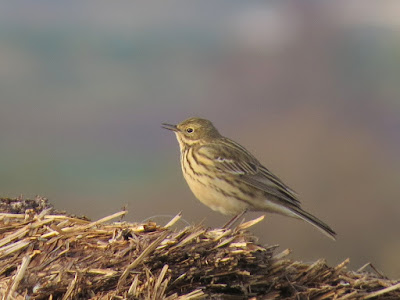 A quick stroll along the river here found two pairs of Teal and another Sand Martin and Chiffchaffs were back in some numbers. I later saw at least half a dozen birds in the Magic Garden alone. 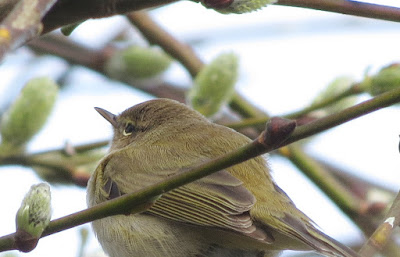 In the early evening I met up with Chris to try once more. Snipe had risen to around ten birds but no Jack unfortunately. Meadow Pipit numbers had really jumped though with 60+ birds now in this field. I assume these are birds heading back to the upland areas of the Dales. A bit of cold weather, particularly with northerly winds, often sees them backing up at this time of year. I have had counts of 200+ birds on occasions and there is then always a chance of Merlin as they follow their prey species up on to the moors.
Posted by Nick at 04:13 No comments: ...this Red Admiral was in the Magic Garden on Good Friday.... 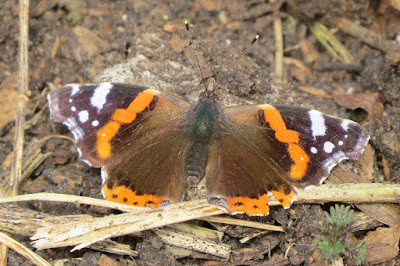 ...and the first Chiffchaff was singing on Langlands yesterday. This was the best picture I managed on a very gloomy morning. 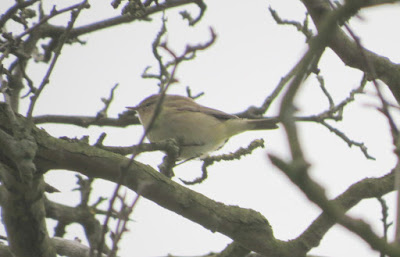 
There were around 100 Fieldfares in the lower fields yesterday and a late Redwing was still hanging on. Excellent numbers of gulls are still around with every remnant shard of floodwater covered in birds including around 75 Common Gulls on Langlands. The field pool at Green Hills held a handful of Curlew and a single Redshank.
Posted by Nick at 06:04 No comments:

A glorious day and almost the first bird I saw as I headed down the river was a Sand Martin – Spring is really here (although I suspect, looking at tomorrow’s weather forecast, this bird may regret being so impetuous!).
As I was watching this bird Chris Knight texted to say he had had Stonechat near the good old muck heaps in Morton. I walked round there but couldn’t find the bird. I then remembered Bill Oddie’s maxim that the only habitat that migrant chats like is rusty wire. There was a pile of wire from an old fence, I headed over that way and right on cue it popped up on top! Thanks Bill! 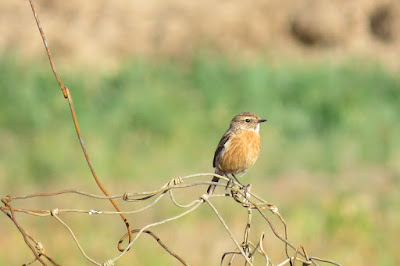 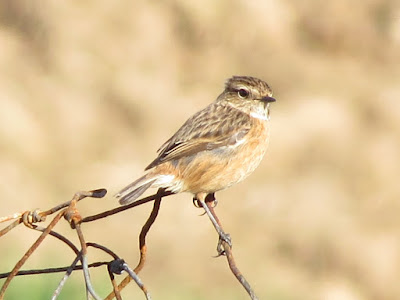 This is only the third Stonechat I have seen in the parish although they did occasionally breed at Morton up to the 1960s.
The sunshine also showed off common species at their best like this Dunnock... 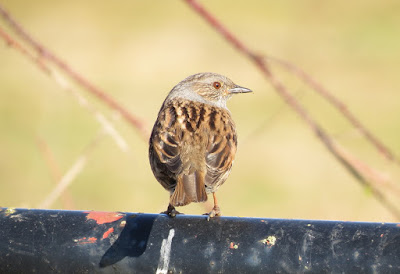 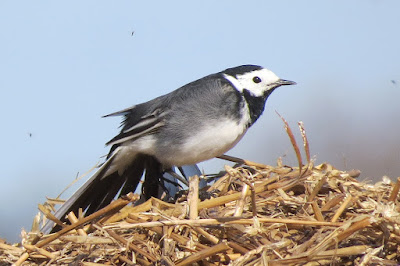 As I walked back over Morton bridge I heard Grey Wagtail. Leaning over the parapet I saw a pair chasing each other in and out of the arches. Perhaps a chance of them breeding here this year? 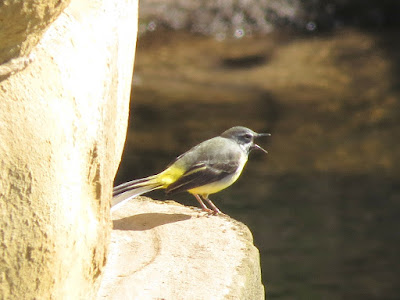 Fantastic weather today and it feels like all change in the parish. The reeds around the Manor Lake were thick with frogs this morning and they were putting up a strikingly loud ‘chorus’ 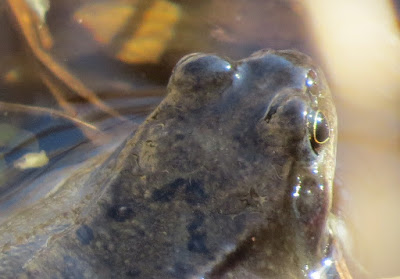 A pair of Mute Swans have also moved back on to the Manor Lake. 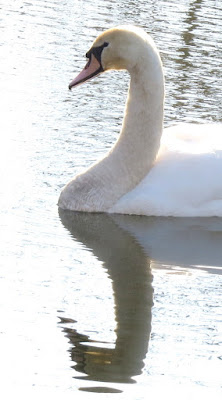 I photographed this flower in the Magic Garden today. It’s a species of scilla but don’t think it’s one native to Britain so assume it is a garden ‘escape’. 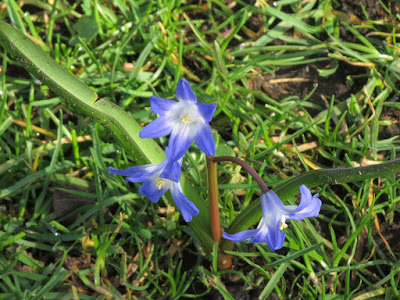 The winter thrushes are moving out with Andy Johnston reporting good numbers of Redwings passing high over Scruton yesterday and there were knots of Fieldfares moving over Morton last night.  Higher numbers of Song Thrushes in the Magic Garden today may have also been migrants. They seemed much more flighty and nervous than the resident birds.
I caught up with my first Redshank of the year yesterday, flying over the river, and this morning added another year-tick in the shape of a Woodcock. The bird flew up from this drain in the Magic Garden which has proved an attractive spot for migrant Woodcock over the years. 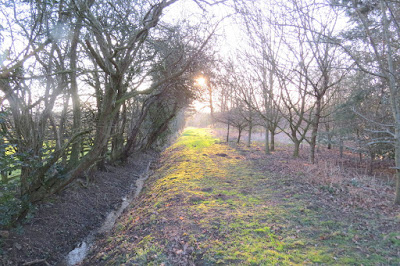 If I had been paying more attention I may have been able to photograph it but in the end inadvertently flushed it at close range.


More butterflies around today too, including this small tortoiseshell on the stained glass in the church. 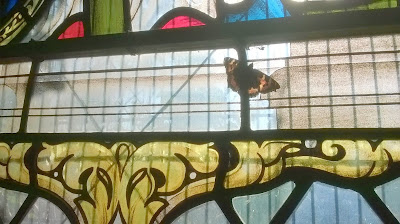 The sun had genuine warmth today and it showed with honey bees buzzing around and my first butterfly of the year, a Small Tortoiseshell in the garden. 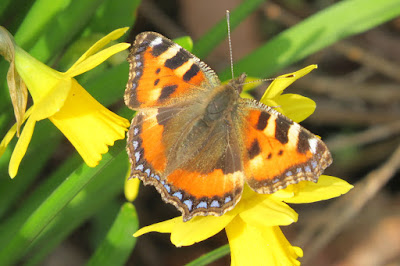 There was also a single Siskin in the garden this morning. This terrible picture was the best I could manage but it was very misty (and I confess was taken from bed!). 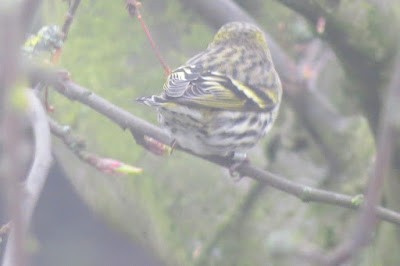 This pushes the year-list up to 79 species, a little ahead of last year.

I think we are lucky in Ainderby that we have a rookery right in the heart of the village. 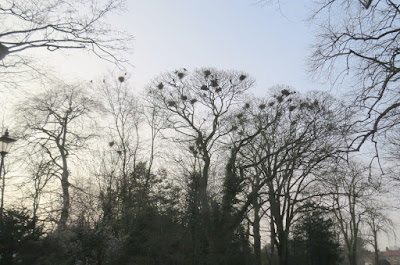 Some people (inexplicably to me) dislike Rooks but if you take time to watch them they are the most intelligent, sociable and fascinating species. The village birds are currently in full nest-building mode. As the number and size of nests grow then suitable twigs get in shorter supply so you see birds flying in from further and further distances with sticks. 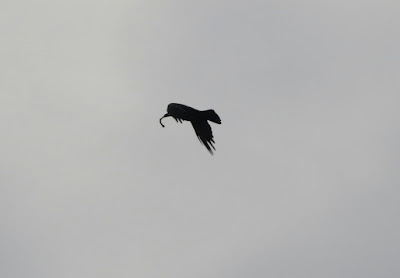 But you also see increases in noisy disputes over the remaining ‘local’ twigs and even surreptitious stealing of choice sticks from neighbours nests (Eastenders has nothing on a rookery!)
Posted by Nick at 10:01 No comments:

March is undoubtedly the best month for seeing Whooper Swans in this part of North Yorkshire as they move north to breeding sites. The species has changed its migration route in recent years and instead of following the Yorkshire coast Whoopers now funnel up through inland Yorkshire and the Vale of Mowbray gets its share of these birds.
It was on this date last year that I had a group of nine over the river at Morton so thought I would try my luck there again. I bumped into Chris Knight here and was just explaining what I was looking for when we heard their unmistakeable wild call! A lovely skein of 27 birds flew north-north west over the river. 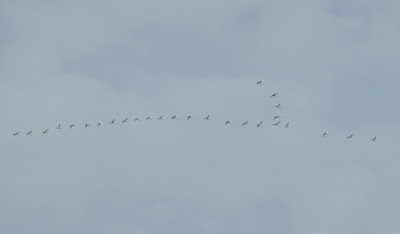 As I walked back towards Morton I picked up the Merlin again. I had excellent views as it swung in over the water works and across the fields to the Thrintoft road where it briefly perched in an ash tree. Unfortunately I spectacularly failed to get a picture again. It would be interesting to know where this bird is roosting.
The good old manure heaps here turned up birds again with Snipe, Grey Partridge, Reed Bunting , Skylark, Meadow Pipits and two Grey Wagtail seen.


There was another Grey Wagtail on the Manor pond last night as well as a roost of around 50 Redwings there.
Posted by Nick at 09:46 No comments:

The floods are back in the lower fields and on Langlands. 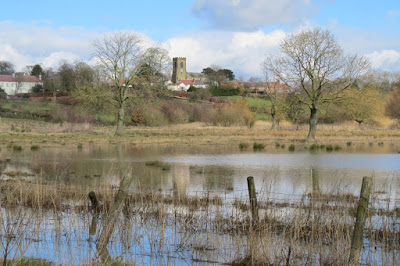 They proved an instant attraction to Black-headed Gulls with an estimated 650 birds on the How Beck fields and a further 300 on the Langlands pool. Other gulls were much scarcer with 20 Common Gulls, five Lesser Black-backed and a dozen Herrings.
My first Canada Geese of the year were on here 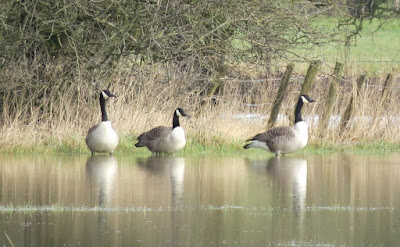 Along with five Teal and four Wigeon 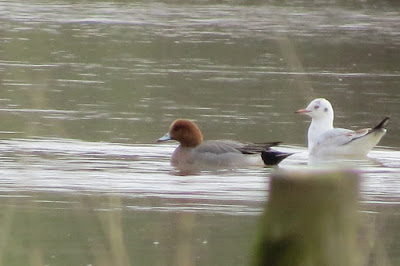 The first Curlews and Lapwings are displaying now. It’s difficult to transcribe the Lapwing’s call, K G Spencer in the excellent (but long out of print) “The Lapwing in Britain” lists different options but finally goes for ayhrre willuch-o-weep, weep, weep; eyu-weep which is pretty good! There are still flocks of Lapwings around too, I assume these are birds that breed further north (or abroad) and haven’t yet gone onto territory?
This evening I had a five minute stroll around the Magic Garden. Two Roe Deer were in the neighbouring field. Whilst I was watching these I heard a splash in the lake, I turned round expecting a bird but actually saw a mammal swimming away half hidden by vegetation. Surely an Otter? 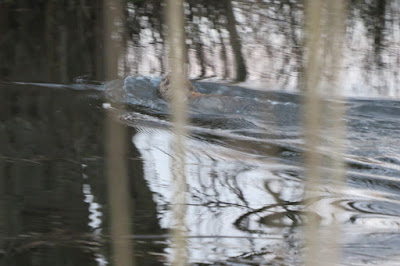 It was actually this…. 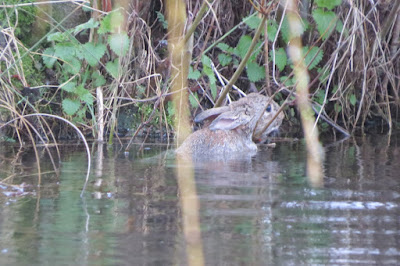 That is the first time I have ever seen a rabbit swimming and I can only assume that it fell in. It also had a strange swimming motion half-leaping out of the water with each forward thrust. Fortunately it was able to scramble out...

Year list to end of February 76 species.
Posted by Nick at 10:33 No comments: