We set the moth traps in the Magic Garden last night not with any great expectation as it was forecast to be clear and cool. The misty conditions this morning didn’t add to the optimism… 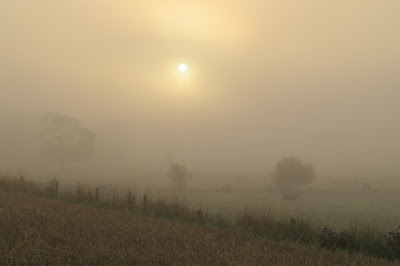 But in the end it was a relatively small but interesting catch with 41 species including six first parish records (plus a couple more to be confirmed). The new ones included half a dozen of these brilliant Feathered Gothics (showing the feathered antennae that give it its name)… 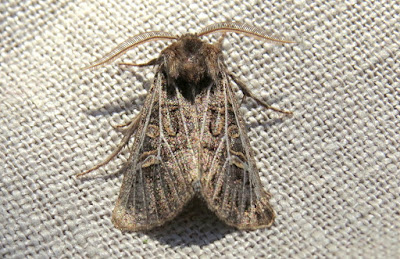 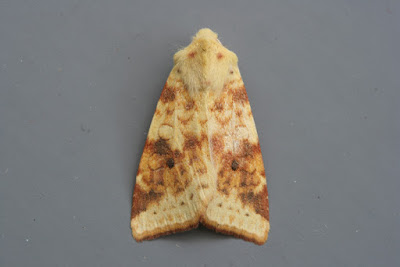 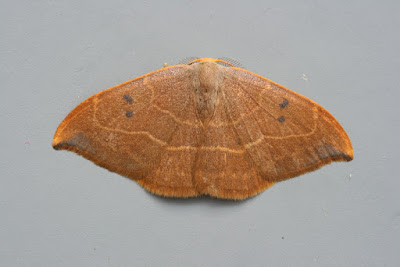 Small Phoenix, Twin-spotted Wainscot and Pale Mottled Willow.
It was only the second record too of Canary-shouldered Thorn… 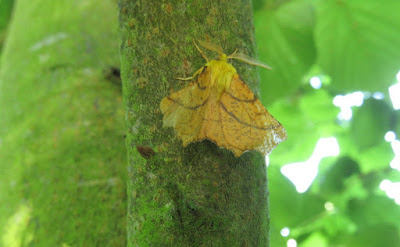 Dragonflies were noticeable again around the lake with three species of hawker, mating Blue-tailed Damselflies and a number of Common Darter… 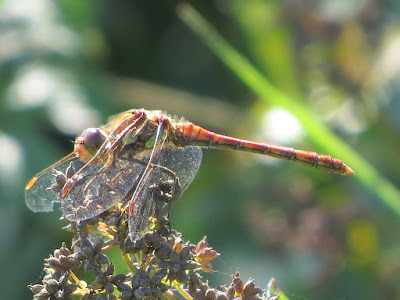 Bird wise it was fairly quiet although at least two Sedge Warblers were still present , around 25 Mistle Thrushes descended on the Magic Garden and a flock of 50+ House Martins were feeding high over the lake.


Yesterday there was Greeenshank and Common Sandpiper on the river, Andy Johnston found a Wheatear at Morton and six Wigeon were on the flood pools. These were my first summer record in the village.
Posted by Nick at 14:48 2 comments:

Early morning in the Magic Garden and there were signs of movement with at least half a dozen Blackcaps ‘takking’ away and lots of Chiffchaffs in the scrub. This little boggy area was particularly attractive… 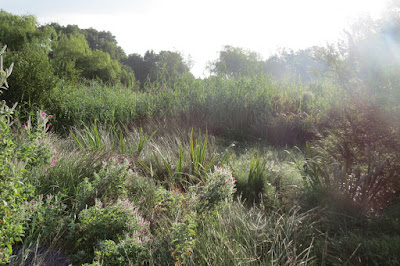 Standing here I saw Willow Warbler, Chiffchaff, Blackcap, Garden Warbler and at least three Sedge Warblers. The most I’ve seen together in the village. 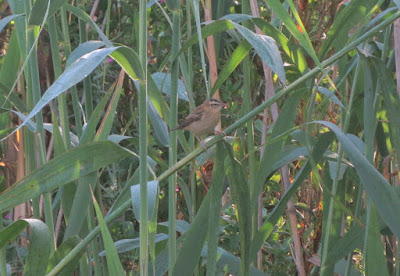 I also saw my first Common Darters of the year here and Brown, Migrant and Southern Hawkers.

On the flood pools in the bottom field the recent rain had topped them up and as well as the obligatory Green Sandpipers (which have been seen every day since late June) there were two Greenshank. Unfortunately this was the best shot I managed for this exceptionally nervous bird. 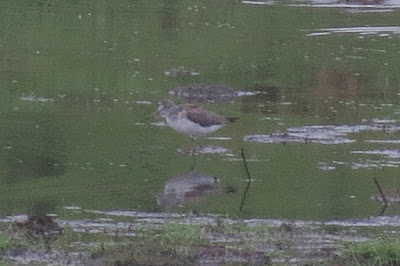 Last night I walked along the river, it was very quiet but I did find a young Coot, a rare bird in the parish and my 108th species of the year.
Posted by Nick at 03:53 No comments:

I have been away on a family holiday in Norfolk hence no posts for the last fortnight. As usual Norfolk effortlessly produced memorable wildlife moments - Twenty Spoonbills on Titchwell marsh, a big arrival of Pied Flycatchers including one that flew in off the sea and landed next to us on the beach at Cley, scores of Chalkhill Blues fluttering along the ditches of Warham iron age fort, three Cranes circling over the evocative remains of St Benet’s abbey…I could go on!
So I woke this morning a little gloomy that I would be restricted to the rather more mundane environment of Ainderby but a text from Chris Knight that he had seen two Whinchat in Morton was a considerable fillip.
As I walked to the muck heap fields I spotted this young Little Owl perched by the railway line… 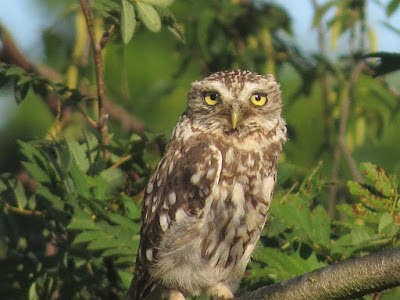 There were lots of common warblers around and also reasonable numbers of butterflies including a couple of dozen Wall browns, my first parish records this year. 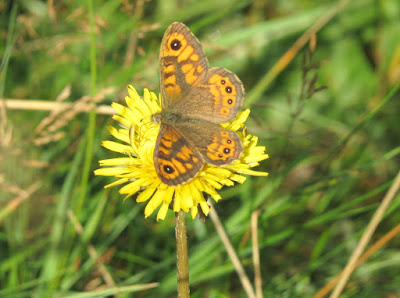 Chris was here but unfortunately the chats had flown off but as we were talking we spotted a superb Osprey over the river. It was soon mobbed at first by gulls and then by a Sparrowhawk. Unfortunately this was the best picture I managed… 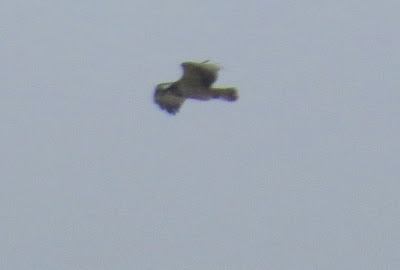 I later got a brief glimpse of one of the Whinchats but in looking for them we stumbled across a great little corner with crab apple and hawthorn bushes that was packed with birds including lots of finches, a couple of Whitethroats and a good dozen phylloscopus warblers… 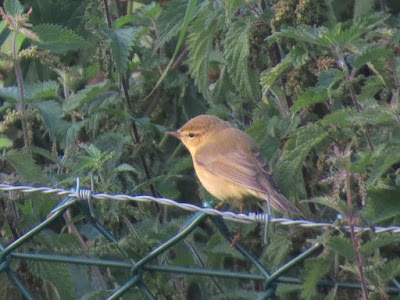 On the waterworks here there were five Grey Wagtails, a record count for the parish.

As I walked back through Morton I spotted the Osprey again circling over the village before rapidly climbing out of sight. An Osprey was seen at Nosterfield later this morning, I wonder if it’s the same bird?
Posted by Nick at 06:58 No comments:

A few signs of birds on the move this week. A colleague rang me to say she had just seen two Sandwich Terns flying over the town library but the best parish records were two sightings of Hobby, on one occasion scything through a mixed flock of around 100 hirundines.
On the little remnant flood pools in the bottom fields there has been a turnover of birds. Up to three Green Sandpipers have been present all week (and indeed virtually daily from late June) notwithstanding the regular disturbance from people walking along the path. Despite this I still haven’t managed a creditable picture yet! 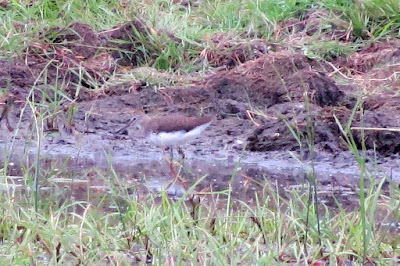 Disappointingly, other waders, with the exception of Snipe and Lapwing, have not been attracted yet. Other than this appalling photograph of an unidentified wader photographed at extreme distance. Unfortunately it was flushed by a dog walker before I could get closer. Any thoughts welcome! 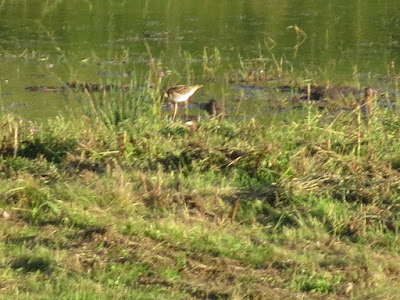 There was also this small (presumably young male) Curlew which had a brief passing resemblance to Whimbrel at distance. 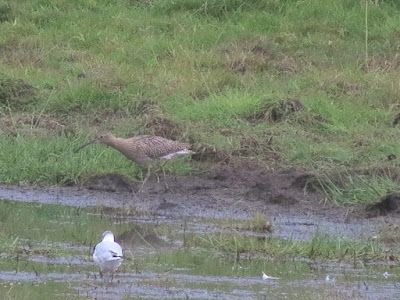 Around 50 Black-headed and the odd Common Gull have been regularly seen on there together with young Pied and Yellow wagtails, small groups of Teal and a family party of four Shelduck. 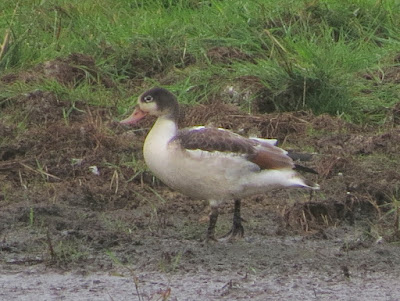 The other day, In next door’s garden, this Dunnock was behaving strangely. I thought it may have been ‘anting’ but there don’t appear to be ants on the bird so it is presumably sunning itself. 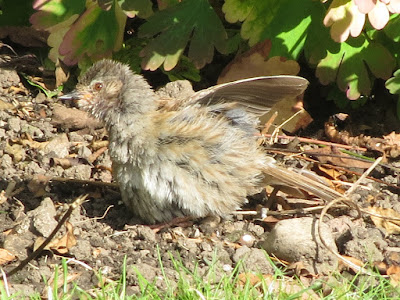 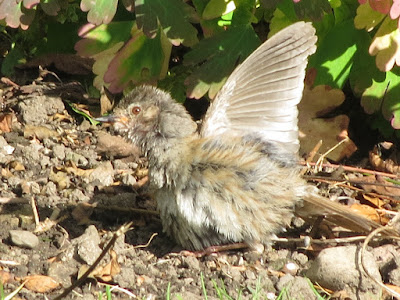 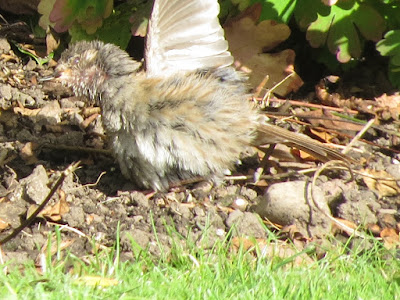 Dunnocks, unlike many birds that sunbathe by spreading both their wings, typically do this by lying on their side and raising one wing at a time. It later turned round and did the same with the other wing. There have been various theories as to why they do this from UV light destroying parasites, the production of Vitamin D, that it aids the spread of preen oil or direct improvement of feathers through sunlight. After a few moments it shook itself and was back to a recognisable Dunnock
Posted by Nick at 13:08 No comments: