A drake Wigeon on the Manor Pond today was the first I’ve seen this year and pushed the year list up to a measly 101 species. I am really missing the wader habitat of last year! 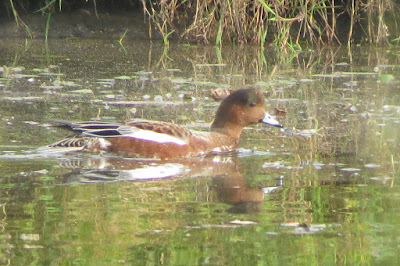 Yesterday the Manor Garden was alive with Blackbirds with at least two dozen around the lake. They were very jumpy and active so I assume they were fresh arrivals (from the continent?). They also spotted a Tawny Owl in a weeping willow on the island and eventually drove it out, sending it flying low across the water. They had all gone by today.
Other sightings included Woodcock over the Magic Garden, Little Egret, 200 Goldfinches and two Grey Wagtails by the river and a flock of 45 Meadow Pipits in the Bottom Fields. I also spotted this Stoat running along the railway… 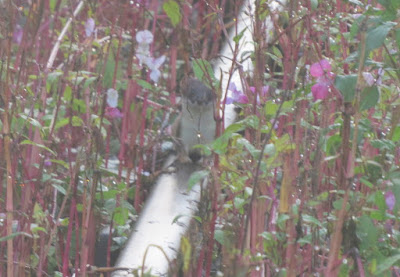 Earlier in the week I went bat detecting with our neighbour Jim and friends of his, Phil & Lynda, from the Nottinghamshire Bat Group. Phil had a very sophisticated bat detector which recorded the calls. They were then put through a piece of software which turned them into sonograms. Not great pics but they were on my phone (and in the pub!)… 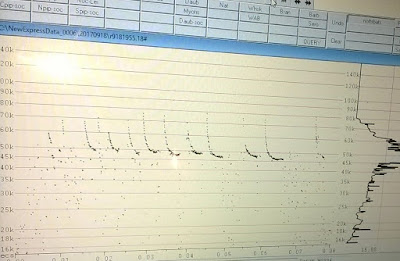 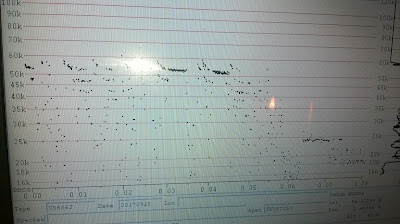 Another pip but this time at a higher frequency (between 50 & 60khz) - this is a Soprano Pipistrelle. 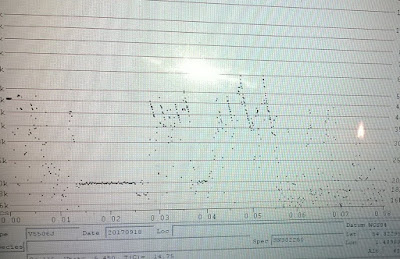 This one shows some species of myotis bat (possibly Natterer’s) with a second species, Noctule, shown in the short straight sequence at 20khz. We also recorded another myotis bat but this time near the water so presumably Daubenton’s bat. 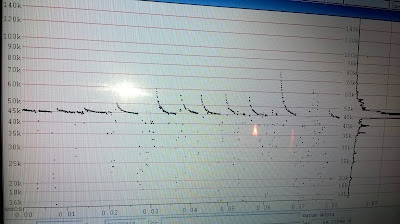 and this one shows  pip again but the effect of different habitats. The flatter, deeper (and therefore further carrying) calls are when the bat is in the open and the higher pitched are when it was hunting around the tree canopy (this was recorded at the top of Greenhills Lane).
Posted by Nick at 14:01 3 comments:

I’ll start with this magnificent beast, a Convolvulus Hawkmoth. Unfortunately not in the parish but close by in Scruton found in a friend’s garden… 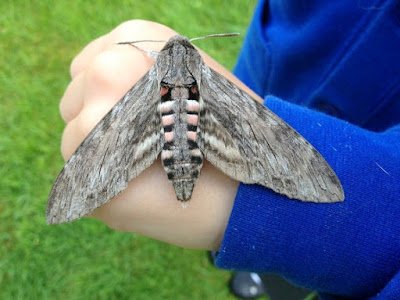 It has still been fairly quiet on the bird front. A very late Swift was still over the Magic Garden on Friday (8th)... 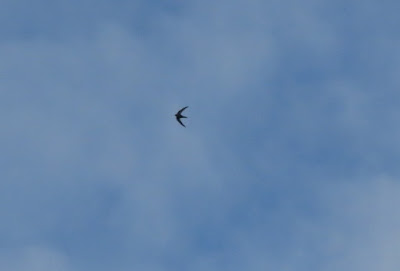 ...and three Green Sandpipers were on the river. A Jay was in the Magic Garden yesterday, the first I’ve seen in the village since April.  I wonder where they go in summer? Today over 100 hirundines were feeding over Warlaby Lane, most were Swallows, flying almost at head height, along with a few Sand Martins. Above this were 20 odd House Martins.
In terms of migration Blackcaps seemed to be ‘tacking’ from nearly every bush yesterday but didn’t see, or hear, a single one today. Instead there seemed to have been a strong arrival of Goldcrests overnight. Buzzards were also on the move with up to ten seen over the village yesterday, including a tight ‘kettle’ of seven birds. This one attracted the attention of the local corvids... 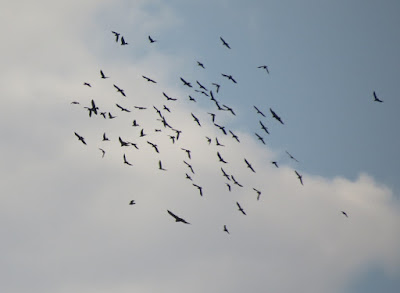 They followed it up until they were all almost invisible to the naked eye.

John, my resident moth expert, did a search for leaf mines in the Magic Garden yesterday and added a remarkable 13 species of moth to the parish list. This included  Phyllonorycter esperella, the first record for North-West Yorkshire (Vice-county 65).


He also came across a number of galls including this striking Oak Artichoke Gall, caused by a tiny wasp Andricus foecundatrix... 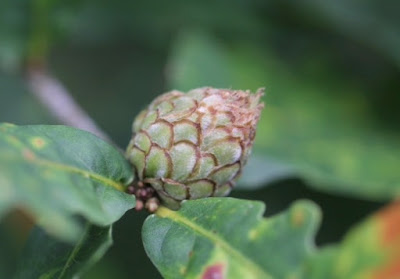