It’s exceptionally quiet at the moment. On the river a single Mute Swan has taken up residence again. As it’s on exactly the same stretch of the river I assume this is the bird which spent the late winter/spring here. 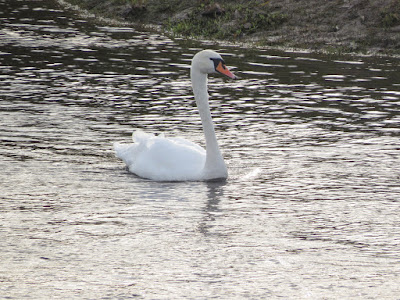 Four Goosander, two Buzzards, a small flock of Siskin and a single Little Egret were the only other sightings of note. 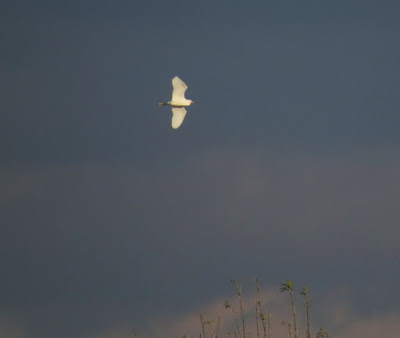 The local egrets now gather to roost at Bolton-on-Swale lakes and this week there were a remarkable 22 birds there (along with 88 Cormorants). It would be interesting to know how wide an area the egrets fly in from as there are never reports of more than the odd one or two birds on the local rivers. It’s also an amazing change of status for a species that I travelled all the way down to Somerset to twitch only a relatively short time ago!
Posted by Nick at 07:58 No comments:

What a Difference a Day Makes... 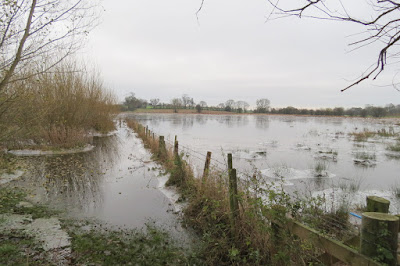 A surprisingly sharp frost last night meant the floods were virtually all frozen. 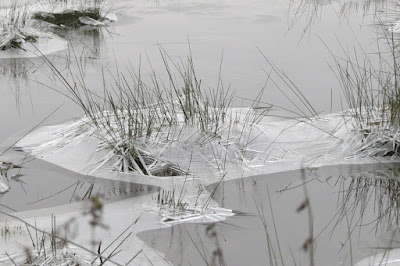 A group of 15 Mallard huddled in the one piece of open water and another 20 were on the lake itself but all the other duck had moved off. A dozen Curlew were left feeding on the odd unfrozen margin. 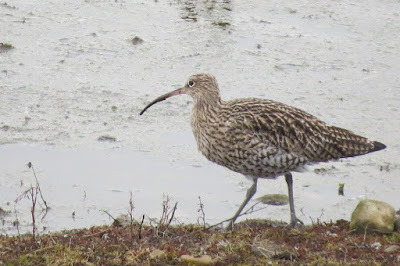 As I walked down towards the floods I heard what I thought was a woodpecker but it turned out to be a Carrion Crow hacking at the ice, presumably to get at something it could see under the surface.

Around 100 Greylags flew over the house this lunchtime and, not surprisingly, the colder weather brought a flood of birds to the garden feeders including the first Nuthatch for a few weeks and up to five Wrens. 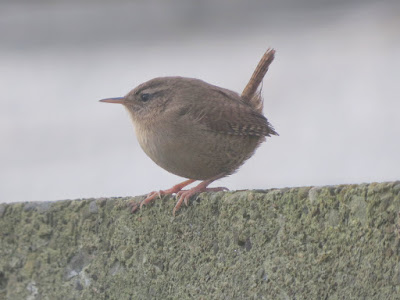 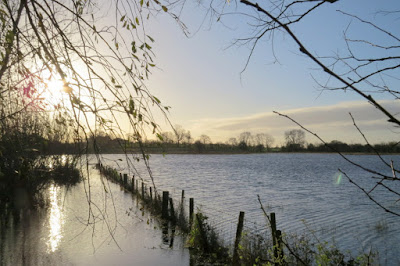 A definite change in the weather this morning with snow lying on the ridge of Pen Hill and a scattering on the Hambletons. A sharp northerly wind too and it seemed to have shifted the birds. As I walked down Warlaby Lane six Wigeon flew over, the 110th species to have been spotted in the parish this year.

On the floods in the bottom fields there were another 13 Wigeon, 30 Curlew, two Snipe, Cormorant,  around 40 Mallard and more surprisingly six Goldeneye. There have only been two previous sightings of Goldeneye in the parish and they were both of single birds so this has quadrupled the records! 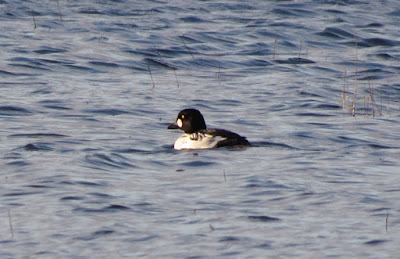 I later walked over to scan the floodwater at Langlands but numbers were significantly down with only around 45 Curlew now, a single Greylag and a couple of hundred Black-headed Gull although the Teal flock was still present along with yet another (drake) Goldeneye.
Posted by Nick at 08:12 No comments:

There was a similar mix of birds on the floods today but the Greylags were joined by 26 Canada Geese, a good sized flock for the parish and the first seen since early Summer. 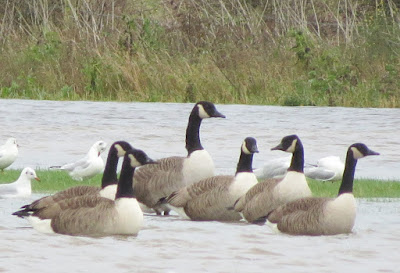 Curlew numbers had increased to around 200 birds (and Andy Johnston reported another 100 on floodwater near Scruton). Two Goosander were also on the floods at Langlands. 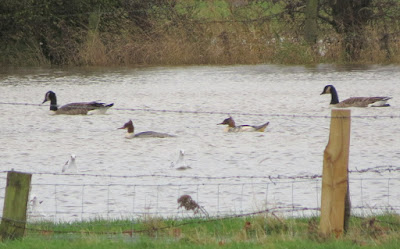 At Morton bridge the river was incredibly high and almost over-topped the railway bridge. However, apart from three Cormorant and a pair of Buzzards, it was quiet birdwise although I did see a large, distant flock of duck, probably Wigeon, drop onto flooded fields near Scruton. 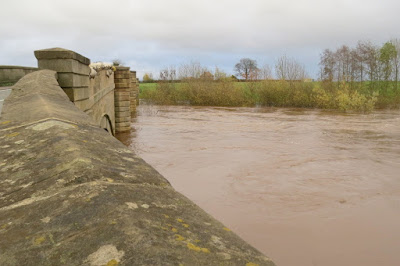 It has to be said this was not the best week to have our roof replaced! But looking on the bright side the rain has flooded the lower fields and they look very promising. 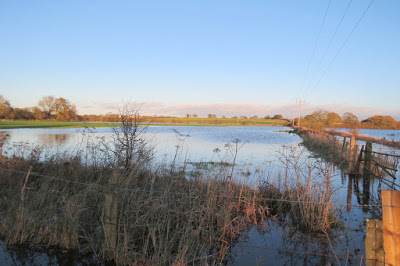 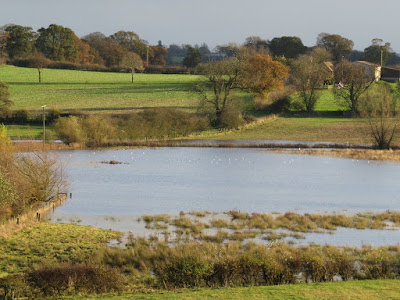 John and Ann at Langlands had rung yesterday to say there were half a dozen Whooper Swans on their fields near How Beck. No sign today but the floods there were thick with birds with around 100 Curlew, a cracking flock of 70 Teal... 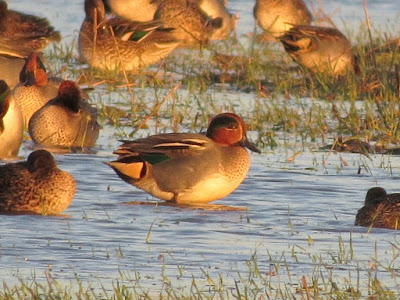 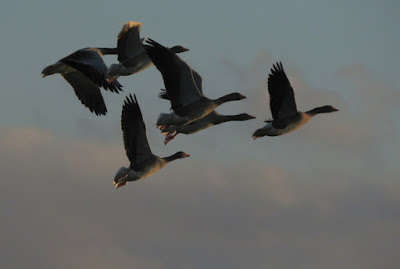 As well as hundreds of gulls and 300+ Fieldfares. 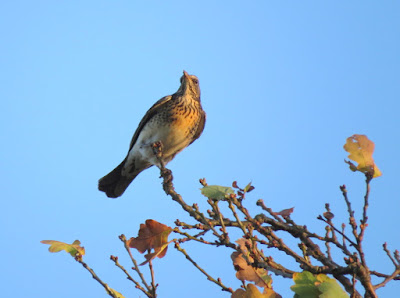 I’ve noticed a few of these little fungi, the Yellow Fieldcap, recently. I photographed this example yesterday. 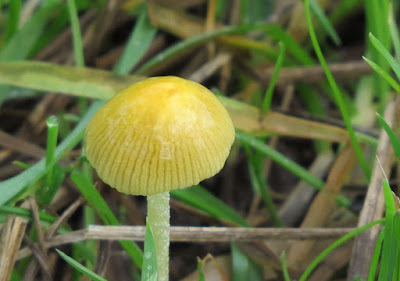 A very striking species almost buttercup yellow and with a glossy coating. But this only lasts a short while and I went back and re-photographed it today and already nearly all the colour has gone. 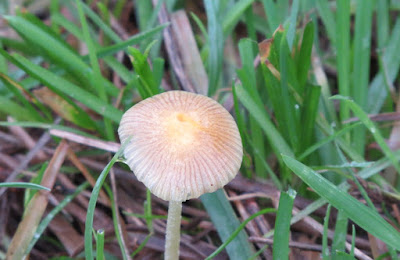 At the lake this afternoon a Sparrowhawk shot low over my head, followed a few moments later by a second bird. They then proceeded to climb, dive, tumble and chase each other for some minutes.
If it had been spring I might have thought this was some form of display (other than the fact they appeared to be the same sex). Perhaps they were siblings and just enjoying the feeling of flying in the wild winds?
Posted by Nick at 12:59 No comments:

In the Magic Garden there is a small patch of boggy ground which I always thought looked great for Jack Snipe and Water Rail. I managed to find the latter this winter, the first record for the parish, but Jack Snipe continues to elude me. The dry weather this summer means much of it got clogged with vegetation but the recent rains have re-flooded it  and I’m still hopeful I might tick off minimus one of these days.
In the same patch these flowers have given a late burst of colour. I think these are Celery-leaved Buttercup (Ranunculus sceleratus) 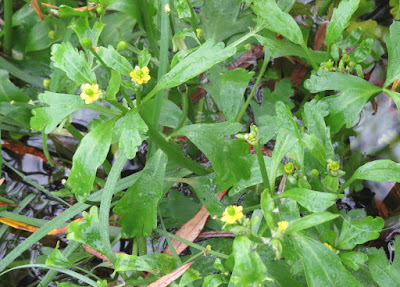 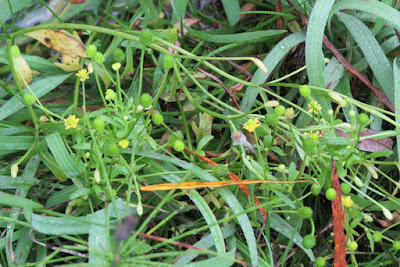 There appeared to be a good movement of Redwings last night and standing in our garden you could hear the evocative ‘tseep’ calls as they flew over, invisible in the thick fog.
Posted by Nick at 11:13 No comments:

Thick fog hung around all day so birding was limited, two Kingfishers were on the lake along with the first Teal since early April. A Buzzard foolishly flew over the village resulting in dozens of Rooks driving it off. Two Jays were still present in the Magic Garden along with a Cormorant and good numbers of Fieldfares. This is typically what happens in the parish with an early influx of Redwings which move on usually leaving the Fieldfare as the commonest winter thrush.

Whenever the conditions are like this it always reminds me of the classic Ladybird book “What to Look for in Autumn” and Tunnicliffe’s fabulous, nostalgic illustrations…. 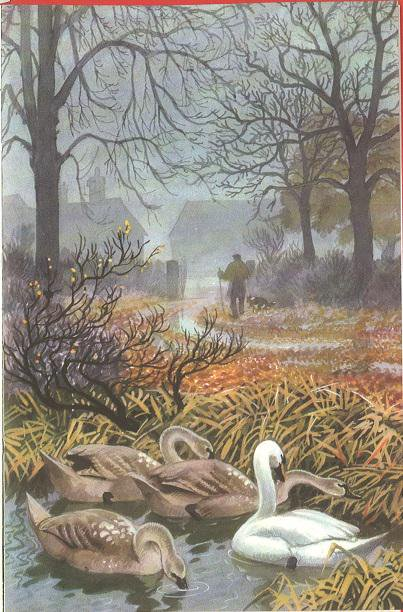 The four seasonal “What to Look For…” books are certainly one of the things which got me interested in natural history as a child and I would recommend every family trying to get hold of them. They have definitely become more collectable in recent years but I still occasionally see them in charity shops and there are usually plenty of copies on Ebay.