I was just about to take my eldest to his Saturday job yesterday when I heard the unmistakeable call of Waxwings. Around a dozen birds flew in over the rooftops and dropped into the trees around the small green in Ainderby.  I couldn’t stop to look at them but texted Jim in the village to keep a look out but they had gone by the time I got back.

Along the river yesterday I added Green Sandpiper and (two) Little Egret to my year list. The Oystercatchers here are taking up territories… 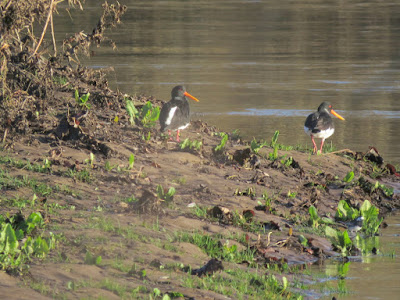 A single Grey Wagtail was on vegetation in the river and up to eight Goosander were also seen. 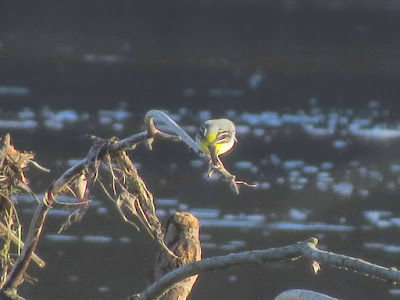 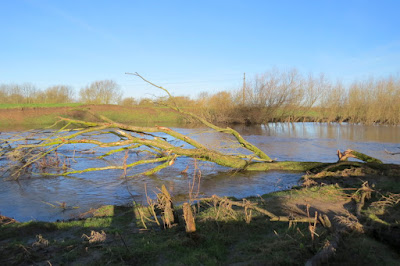 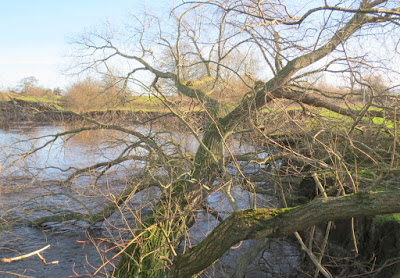 This morning I walked down Greenhills Lane. The Curlew flock is slowly building up with 26 birds there today although still a long way off the record flock I had of 200 birds a few years ago. Good numbers of winter thrushes are gathering too, with very large flocks of Fieldfares in the muddy open fields along the Lane. 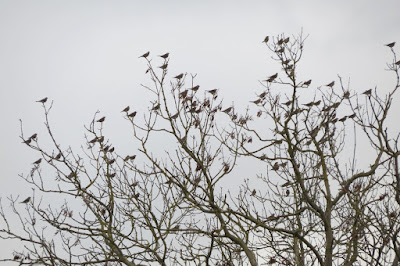 Numbers of Redwings are smaller and, in contrast, they are mainly concentrated up in the paddocks and pasture near the village.

On the flash there were 65 Greylags, 35 Lapwings, two Oystercatchers and four Shelduck… 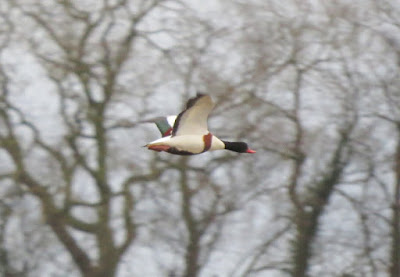 Also Good numbers of Reed Buntings which have outnumbered the Yellowhammers this winter. 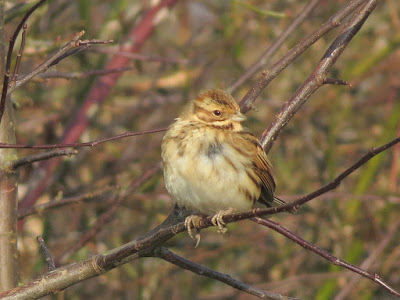 An old ash tree in the Magic Garden has become a regular loafing site for Cormorants now. 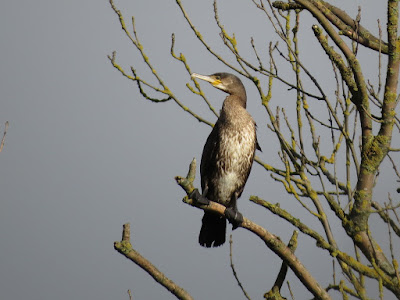 This bird is probably of the ‘British’ form (carbo) distinguished by the smaller angle between the back of the orange gular patch and the bill... 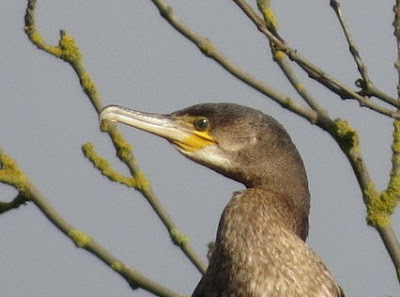 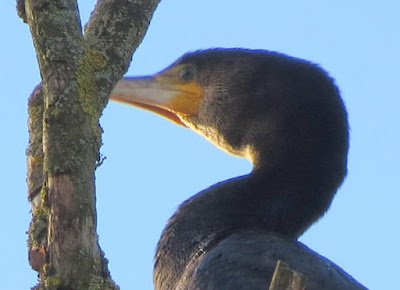 At last! I was sure I was going to miss out on Waxwings in the parish despite birds appearing all around (including seeing three separate flocks at work) but as I was driving back from picking up my mother-in-law this morning I spotted a couple in a tree in Morton. I drove home, grabbed my camera and shot back. Unfortunately the light was not brilliant but that didn’t take away from seeing a flock of at least 80 birds.
It may have been more as this group was in one of the trees and represented only about half the birds… 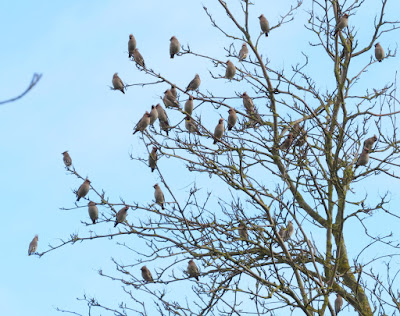 Talking to local residents they estimated there were over 200 here on Thursday. 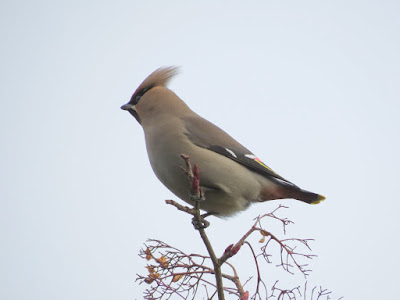 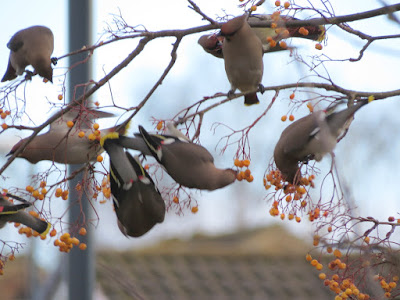 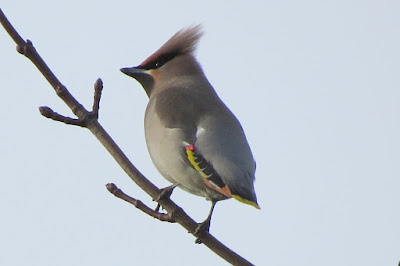 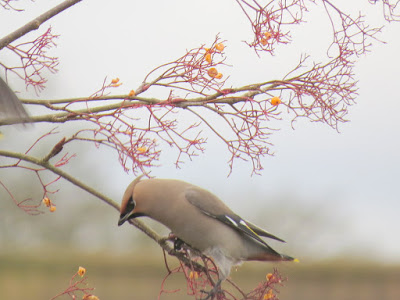 Yesterday a walk along Greenhills Lane turned up a flock of 147 Greylags, two Oystercatchers  and my first Shelduck of the year. 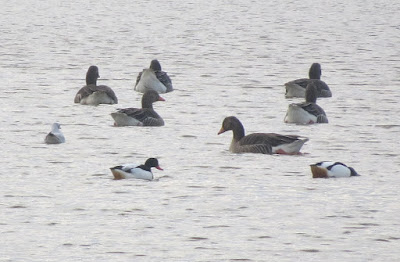 Another three Shelduck were with 20 Curlew in the Bottom Fields and two more were on the wader pools. They had all gone by today.
Posted by Nick at 05:13 5 comments:

Most exciting news this week was the addition of Common Crane to the village bird list, just on the far eastern edge of the parish. It was spotted by Arnold Robson, an experienced local naturalist, as he drove from Yafforth to Warlaby crossroads.  He rang me when he got home but it was already dark by then and a search the next morning on the way to work was unsuccessful. However, yesterday the bird was seen again near Lovesome Hill (north of Northallerton) so might just head back this way at some point. James Robson had a Crane at North Kilvington in late December so it’s possible this bird has overwintered in the area.
Otherwise on a cold and gloomy weekend, only brightened by a nice showing of aconites… 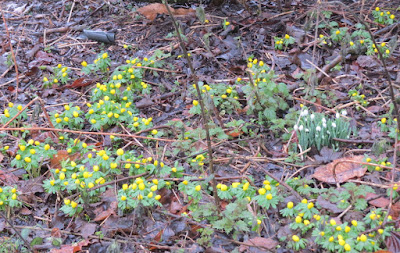 ...there wasn’t a great deal about although I did see my first Treecreeper of the year and the Water Rail is still in the Magic Garden, better views this time but still too brief for photographs. The Greylag flock in the Bottom Fields has grown to 41 and they were joined by 15 Curlews. The only other sighting of note was a small southerly movement of Stock Doves over the village with 19 seen in half an hour.
Posted by Nick at 05:54 No comments:

This Pinkfoot was with the small Greylag flock in the Bottom Fields on Friday but had gone by the next day. Although Pinks are occasionally seen flying over the parish this is actually the first I’ve ever seen on the ground in the village… 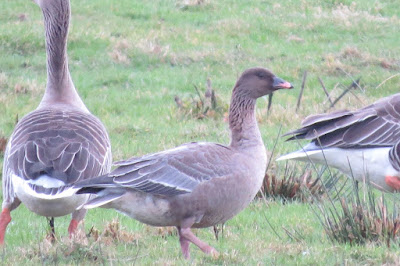 Along the river I had my first Oystercatcher of the year… 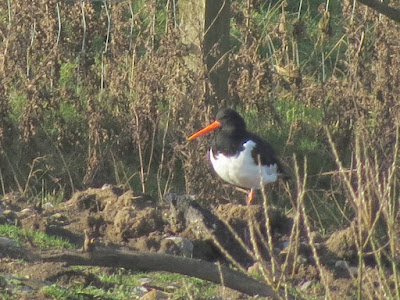 These are usually the earliest harbinger of spring in the parish although there were other reminders of the coming season with the first Skylarks singing today and half a dozen woodpeckers drumming.

I also spent a good half hour trying to catch up with a bunting I flushed from the river bank. It was creeping  through the short turf here and I had thoughts of Lapland (or rarer!) but it was just this female Reed… 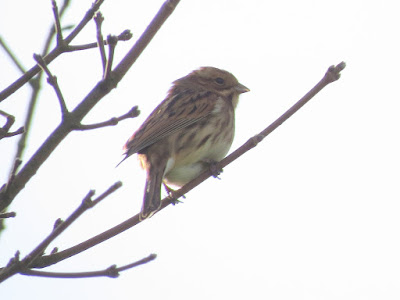 Along Greenhills Lane this morning I added a pair of Grey Partridge and a small flock of Linnet to my year list. A group of 40+ Tree Sparrows were in the ‘Avenue’ and I would have had a rather nice portrait of one of them if it hadn’t turned its head at the last minute! 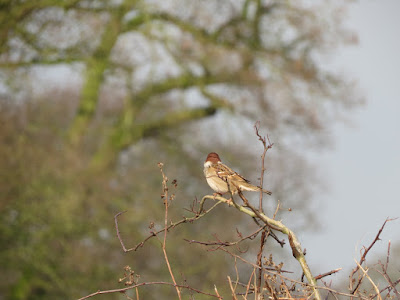 In the medievally muddy sheep fields near the ruined barn… 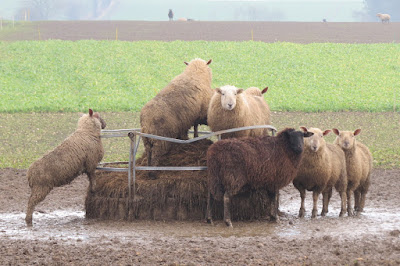 there were small numbers of Greylags… 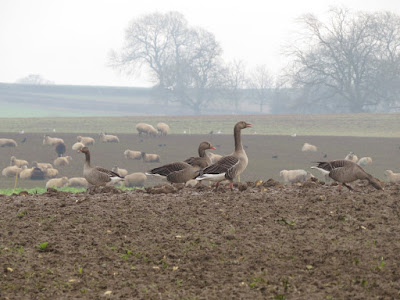 …along with 100 Black-headed Gulls, 30 Lapwing, a couple of dozen Pied Wagtails and a handful of Meadow Pipits and Reed Buntings. Thrush flocks also seem to be building up again with around 150 Fieldfare and 50 odd Redwings… 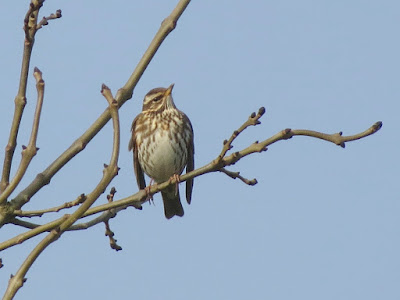 Other sightings over the last week included Barn Owl and two Little Owls on the Thrintoft road. I was really pleased to see the Barn Owl as they have been disturbingly scarce this winter after the bumper crop last year.
Posted by Nick at 05:44 No comments: